Is social investing the Scarlet Pimpernel of the Vickers Report? 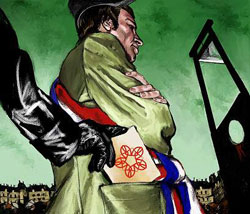 Social investing (equivalent to impact investing) encompasses such an increasingly broad range of financial activities and products, that some of it may be considered investment banking for the social sector. Examples include Social Impact Bonds and the sophisticate structured funds incorporating first-loss equity tranches, mezzanine finance and the provision of debt and equity underwriting. In the anticipation of UK High Street banks being separated according to retail or casino activities, on which side of the line should social investments lie?

The Chancellor of the Exchequer, George Osborne, announced on 15 June 2011 as part of his Mansion House address that he supported in principle the proposal of the Interim Report by Sir John Vickers that UK financial activities need to be separated and retail banking ring fenced. The recommendation is based on the premise that systemic risk in the financial sector would be reduced if a firewall is established between retail banking and investment banking (the former refers to High Street savings and loan products which serve the general public and SME’s, whereas the latter refers to higher-risk investments, derivatives and the ‘casino banking’ which is often blamed for the 2008/9 financial crisis). Irrespective of one’s view of whether the separation will achieve the desired effect, neither the Vickers Report nor Osborne’s address specifically detail how social investments should be classified within this polarised arena.

In fairness, social investing (the blending of social and financial outcomes) encompasses such a broad range of financial activities that it would not be wise to generalise, rather aspects of it should be classified on the basis of the underlying activities. The Vickers Report (Annex 7) defines three categories of activities; those which must be undertaken by retail banks (retail deposit taking), activities strictly prohibited by retail banks (provision of capital market services, client hedging services, proprietary trading etc), and activities which may be permitted by both (loans, mortgages, credit cards, project finance etc). It explicitly states that investment products cannot involve retail deposit taking. On face value, it appears that social investing undertaken by retail banks would not be permitted. Is this in keeping with the spirit of the recommendation?

Social investment is becoming accepted as a nascent asset class and regularly likened to hedge funds which are considered a distinctive asset class because of the specific characteristics associated with them and the requisite skill sets in managing them. One might initially assume that much of social investment should therefore sit on the casino banking side together with other higher-risk asset classes such as derivatives, securitisation, and mergers and acquisitions. After all, it is now taken as a given that social investors must typically accept higher than market-rate risk in relation to the financial returns achievable. In other words, social investments deliver lower than commensurate risk-adjusted returns, and social investors must be prepared to pay a financial price for social impact.

However, it does not automatically extrapolate that all social investments should be bundled with everything which sounds similar. This article explores why social investing presents a unique conundrum of classification and argues that most social investments should be classified on the benign side of the line as part of retail banking, and that doing so would paradoxically be in the interest of both the financial sector and civil society (i.e. Big Society).

In real terms there are many work-arounds for this dilemma. Loan agreements can be structured in whichever way the two parties wish and there are countless examples of loans to social organisations which by all accounts resemble and behave like equity, mezzanine finance or even angel funding. Social sector organisations can establish subsidiaries which own assets and these subsidiaries can be floated on an exchange. Investors may not strictly trade their shares to take advantage of capital appreciation, although they could trade their loan interest in a secondary market if they desired a quick exit.

Some seasoned practitioners and commentators use more nuanced language to be factually correct and refer to ‘equity-like’ investments, although it is not surprising that most casually refer to investments using the more familiar labels based on how they appear under general scrutiny. Deals are often structured on participatory terms which mean that investors, who seek equity-like investments in social sector organisations, are able to receive investment returns commensurate with equity investments as well as a return of principal.

The technical and legal case for categorising the majority of social investments as part of retail banking (i.e. that social investments are in fact loans) may be a sufficiently robust argument, but it is not the full picture. There is also a compelling ethical case for doing so and thereby justifying the additional guarantees provided by the State, explicitly through the Bank Deposit Guarantee up to savings of £85,000 and, subsequent to the last financial crisis, also implicitly to potentially higher sums.

Social investments by definition deliberately target both social and financial outcomes, sometimes prioritising one over the other, but always having both expressly part of the investment strategy. This blended model is designed to achieve socio-economic value, strengthen the fabric of civil society, reduce dependency on the State and enable communities to become more self-sufficient.

It was no accident that social investment institutions and intermediaries typically escaped the worst of the recent financial crisis, none in the UK required a Government bail-out! There are a number of reasons for this ranging from the inherent behavioural differences of executives to the organisational characteristics referred to above. These organisations are typically much smaller than mainstream finance conglomerations and there is much greater diversity and heterogeneity amongst market participants, thereby reducing vectors of contagion and helping to reduce overall systemic risk.

The issue of ownership and lack of quick exit for investors contributes positively because it forces a shift towards a longer-term focus, the absence of which in the mainstream markets prior to the crisis has been identified as a contributing factor to the crisis itself. Social investors tend to be less transactional in their approach and need to be more engaged in their investments, often injecting business skills and patiently coaching investments towards success.

It would be welcome for society if mainstream finance adopted many of the principles of social investment.

There will inevitably be undesirable consequences of the Chancellor’s proposed reforms which supporters are arguing is a price worth paying. Notable is the fact that the profitability of retail banking will probably be depressed as a result of these reforms and it is already speculated that mainstream banks will discontinue to offer free current account banking, amongst other things currently taken for granted. It is also probable that savers will become dissatisfied with the low returns on the savings accounts available from the ‘safe’ retail banks and it is likely that they will be tempted to move more of their savings to higher yielding and higher risk investments. It is inconceivable that the UK Government’s Bank Deposit Guarantee would be extended to the casino banks, in which case it could mean that many person-in-the-street investors find themselves exposed when the next crisis hits if they have moved their capital to higher-risk products in search of financial returns. This is of particular concern if interest rates remain low for a prolonged period and could even result in the reforms being self-defeatist if not correctly managed.

It would also be in the financial interest of retail banks and their shareholders if they where the channels for this capital flow, and help them achieve their Merlin targets of increased lending to support economic recovery and make societal contributions.

Explicitly classifying qualifying social investments on the retail banking side of the line would create a powerful opportunity for the Government to signal to the market that it encourages more social investments to be undertaken by mainstream financial institutions. The UK has sufficient examples of successful social investment with healthy financial as well as social returns achieved. Not only would this be good for society and good for ethical investors, it would probably encourage much more capital to be directed towards the social investment market.

Active encouragement of this by Government would be a very welcome incentive in supporting its vision for strengthening the social investment market. Of course due care needs to be exercised to avoid injecting too much capital too quickly, to avoid abuse and to avoid distorting the market or creating an asset bubble. Arguably these aspects can be successfully managed and overall this would be viewed as a legitimate form of market intervention to correct imbalances of a financial sector which generally prioritises the interest of capital and executives before the interests of society.

Social investment may currently have a lacklustre image akin to the public facade of Sir Percy Blakeney in Baroness Orczy’s novel The Scarlet Pimpernel, but Sir Percy leads an exciting double life as brave swordsman and hero who rescued aristocrats and innocents from a reign of terror. Could social investment include such a vibrant element?

It is hoped that the arguments put forth in this article would not be seen as a loophole in the system but rather aligned with the spirit of what the Chancellor’s reforms are trying to achieve, namely the reduction of systemic risk, and ultimately viewed as a positive element in building a stronger civil society – some may choose to call this Big Society.

Or is there another option not explored in this article – Is this issue something that should be addressed by the proposed regulator for social finance, as advocated by NESTA & Bates Wells & Braithwaite here ?