I recently went to Washington to learn about the new global impact economy being advocated by US Secretary of State Hillary Clinton, and specifically to find out whether it is aligned with social business and social investment initiatives in Europe. Indeed, there is much more commonality than disparity, and (hopefully) this is the beginning of a global movement to create an economic model that serves both the interests of people and capital. 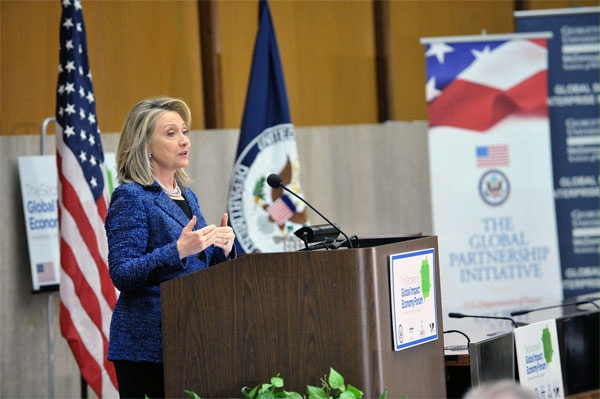 I was invited by Secretary Clinton to speak at the Global Impact Economy Forum held at the US State Department (full agenda here). Hillary Clinton convened this meeting to support the development of a global impact economy – a vision for an international development agenda that does not have an equivalent in Europe. But her vision is aligned with principles of the social and solidarity economy as well as the third sector. It also resonates strongly with new EU policies on social innovation and social business.

Secretary Clinton used her keynote address to launch her new agenda for supporting economic development – Accelerating Market-driven Partnerships (AMP). It is also linked to her concept of ‘smart power’ for 21st century statecraft within a more networked and multi-polar world (detailed article here). The US State Dept believes that a stronger global impact economy can help create new international markets and business opportunities for US business and citizens – but this is also true for non-US business and citizens, provided the potential is recognised by political leaders.

The AMP agenda is being run by the US State Department’s Global Partnerships Initiative. In the context of limited financial resources, Clinton believes that it is imperative for governments to harness their power to convene key stakeholders and promote deeper cross-sector partnerships. To this end the US State Dept is keen to identify new mechanisms and structures that support the impact economy, and it is looking for innovative solutions that result in more collaboration.

I represented Euclid Network, the European network of civil society leaders, on the plenary panel ‘From Niche to Mainstream: New Frontiers of Policy’. It was a wonderful opportunity to share our European experiences with the US State Department and over 400 delegates – including high-level investors, business executives, entrepreneurs, philanthropists, academics, journalists and policymakers.

The interactive panel discussion was moderated by Rosabeth Kanter of Harvard University and fellow panellists include James Zhan of UN Conference on Trade and Development, Peter Knight of Generation Investment Management, and Marisa Lago of US Department of Treasury.

My introduction by Rosabeth Kantor provided a notable revelation about US perceptions of Europe, and certainly raised expectations. Kantor said that from a US perspective, Europe is seen to be a leader in impact investment and therefore they are very interested in hearing more from us on this subject… and that it is time we heard a good news story from the EU after so much doom and gloom in recent times.

I summarised how social investment (as it is mostly referred to in Europe) falls under the Social Business Initiative, which is one of the 12 levers of the Single Market Act, and that the Single Market is a core part of Europe’s 2020 Strategy for smart, inclusive and sustainable growth. As such, social business and social investment are seen as part of the mainstream socio-economic agenda. I was also asked to discuss the new European Social Entrepreneurship Funds (EuSEF) regulation, the ‘passporting’ regime to assist social investment funds in cross-border fund raising, as well as the Euclid / Credit Cooperatif work with task force for the creation of a European Social Investment Facility.

I pointed out that there is strong read-across between the fundamental principles of the emerging impact economy, social business and Clinton’s ‘smart power’ vision for the role of government in the 21st century. They all incorporate plurality and diversity at their core, as being both necessary and also desirable features. In fact, the social economy is often criticised for being fragmented and therefore difficult to scale, but appropriate mechanisms and structures can – and do – support this diversity and allow it to scale (as we highlighted in the task force for a European Social Investment Facility). This is an opportunity for great mutual learning.

Reflecting on the conference in Washington, it emphasised to me that our European leaders, who have prioritised social business and social investment, must engage wholeheartedly in this global debate if they wish to assert any influence on this international agenda.

To Commissioner Barnier (responsible for the Social Business Initiative) I would say that, notwithstanding the urgent internal challenges of the EU, we must also consider the Social Business Initiative in terms of foreign policy. The EU should engage more strongly in the intellectual and political leadership towards a new global impact economy – failing to do so when the EU is perceived to be the de facto leader on this subject would be an inglorious missed opportunity.

To national leaders like UK Prime Minister Cameron who has defined his tenure with the idea of Big Society, and French President elect Hollande who is committed to ending ‘austerity’, I would say that for both we need to attract private capital and that a stronger global impact economy is at the heart of realising their ambitions. Therefore, it is also in our respective domestic interests to show strong leadership at EU level on this topic. We need to bind the EU voice so that collectively we can continue to lead globally on the impact economy (I am sure my US colleagues will forgive the EU jingoism, it is important that our political leaders understand the necessity to engage).

We need to shape a cohesive and well articulated global movement if the impact economy is to become a reality. The EU and its member states should embrace this opportunity to lead on an issue we understand so well. However, to lead globally, Europe must evolve the current narrative of social business and the social and solidarity economy towards one that is more inclusive, more globally accessible and more desirable for all.